Since we first wrote about the Clever Medkit back at the start of 2015, the company have moved the product on.

The original design of the product has been updated and improved.

There is now an associated app that automatically monitors your first aid readiness across an entire organisation, sending critical alerts in the event of a workplace incident.

Clever Medkit provide a suite of analytics and metrics that allow you to see current and future trends that can help you decide on preventative actions to reduce workplace injuries and improve safety for your people. This feeds well into Health and Safety monitoring requirements.

The product is primarily available in Australasia but there is limited availability on Europe and the company is asking for people to contact them to declare there interest in the product.

On the video front the company has produced a highly amusing showcase video that is well worth watching.

 Clever Medkits are here! from CLEVER MEDKITS on Vimeo. 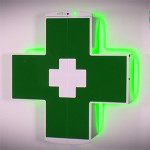 A new type of first aid kit for the workplace was shown at the 2015 Consumer Electronics Show (CES) in Las Vegas.

Clever Medkit™ is the idea of New Zealand entrepreneurs Peter Montgomery and Peter Gillman. It uses technology to address some of the headaches associated with maintaining a first aid kit and recording incidents. It also tries to make it as easy as possible to quickly retrieve the items needed to deal with common first aid incidents.

The first aid kit is quite large and lit with a green light. This makes it virtually impossible to miss. It also makes it difficult to ignore, so you probably wouldn’t want to place it where it may be a distraction to everyday business operations.

Each type of medical supply within the Clever Medkit™ is kept in separate, illuminated compartments. Also inside the first aid kit are a number of buttons for common incidents (trauma, burns, eye injuries etc.). Once a button is pressed, the Clever Medkit™ lights up the compartments containing appropriate items for that type of incident. This should speed up the gathering of appropriate items by the first aider. First aiders shouldn’t rely on this though. They should consider the nature of the incident and choose items accordingly.

The Clever Medkit™ incorporates a camera in the top of the first aid kit. A picture is taken of anyone removing items from the first aid kit and a log is kept of the time and items removed. This easily allows use of the first aid kit to be monitored and the log can be accessed remotely on-line. There is a suggestion that this feature can be used as an automated incident log. At the time of writing, it could not be determined if the log can be supplemented with additional information (e.g. the treatment administered – a UK legislative requirement). Without such supplementary information a traditional incident log will still be required.

One of the issues that the Clever Medkit™ deals with is that of managing the contents of the first aid kit. If an item is removed, the compartment that held the item is illuminated with a red, instead of a green, light. In addition, the green light at the top of the Clever Medkit™ also turns red. Thus flagging that stock needs to be replenished. The on-line feature of the Clever Medkit™ also alerts the person responsible for restocking. A list of items that need replacing can be viewed on-line and, if desired, an automatic order placed for new stock.

Individual workplaces require individual risk assessments, which in turn may require additional items to be stocked in the first aid kit. Given the technology used by Clever Medkit™ it seems likely that compartments might be customised to hold non-standard items. The ability for this level of Clever Medkit™ customisation wasn’t clear at the time of writing.

So is this the future?

Clever Medkit™ brings an innovative and fresh approach to the traditional workplace first aid kit. It has clever and useful features that seem to provide benefits over existing offerings. It has already won a number of awards for design and innovation. However, at the time of writing there was no pricing structure available and it is difficult to determine how it will sit with diverse heath and safety legislations across different countries. If the pricing and customisation capability is right and individual legislative requirements are catered for, this may indeed be the way of the future.

What our students are saying

What we are blogging …

What we are tweeting..

This website uses cookies to improve your experience while you navigate through the website. Out of these, the cookies that are categorized as necessary are stored on your browser as they are essential for the working of basic functionalities of the website. We also use third-party cookies that help us analyze and understand how you use this website. These cookies will be stored in your browser only with your consent. You also have the option to opt-out of these cookies. But opting out of some of these cookies may affect your browsing experience.
Necessary Always Enabled
Necessary cookies are absolutely essential for the website to function properly. This category only includes cookies that ensures basic functionalities and security features of the website. These cookies do not store any personal information.
Non-necessary
Any cookies that may not be particularly necessary for the website to function and is used specifically to collect user personal data via analytics, ads, other embedded contents are termed as non-necessary cookies. It is mandatory to procure user consent prior to running these cookies on your website.
SAVE & ACCEPT